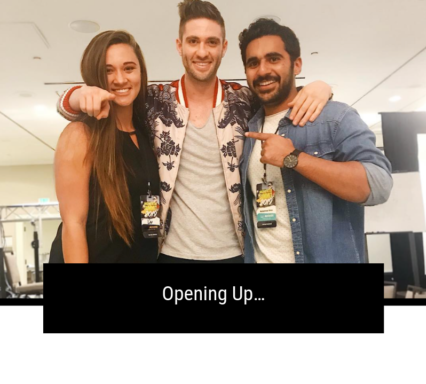 15 years ago I was in a drastically different place ⁣⁣⁣
⁣⁣⁣
I love going for drives and blasting music. It clears my head like nothing else & it’s gotten me through some pretty shitty times. Today I was listening to old school @eminem ⁣⁣⁣
⁣⁣⁣
For anyone who listens to him you know some of the lyrics can be pretty fucked up lol 😂⁣⁣⁣
⁣⁣⁣
When I was growing up @eminem is all I listened to. For the longest time I felt as though he was the only one who could understand. He rapped about things that I related to on such a deep level but couldn’t talk about ⁣⁣⁣
⁣⁣⁣
Things like…⁣⁣⁣
▪️Depression ⁣⁣⁣
▪️Dysfunctional/toxic relationships ⁣⁣⁣
▪️Volatile marriage ⁣⁣⁣
▪️Lack of a father/parental figure ⁣⁣⁣
▪️Drug and alcohol abuse ⁣⁣⁣
▪️Suicide and dark thoughts ⁣⁣⁣
⁣⁣⁣
Growing up (elementary – middle school) was a very dark & lonely time. I genuinely felt the weight of the world on my shoulders…but no one knew. I never talked to anyone about it and I just handled it on my own.⁣⁣⁣
⁣⁣⁣
I thought no one could relate. So I said nothing⁣⁣⁣
⁣⁣⁣
I wanted to be strong for my family so I put on a front. ⁣⁣⁣
⁣⁣⁣
Something we’ve all done ⁣⁣⁣
⁣⁣⁣
This role that I took on caused a lot of damage in my young adult life…⁣⁣⁣
▪️Not knowing how to ask for help⁣⁣⁣
▪️Putting others and their happiness before my own ⁣⁣⁣
⁣⁣⁣
It didn’t have to be that way. ⁣⁣⁣
⁣⁣⁣
TBH I don’t really know why I am making this post other than the fact that I know people will relate to it. ⁣⁣⁣
⁣⁣⁣
The sooner we realise that being open, honest & vulnerable is the answer, the sooner we can all heal.⁣⁣⁣
⁣⁣⁣
Were stronger when we can move as a unit⁣⁣⁣
⁣⁣⁣
…When we can work through personal situations as a team⁣⁣⁣
⁣⁣⁣
…When we can be vulnerable.⁣⁣⁣
⁣⁣⁣
…When we can talk about our mistakes⁣⁣⁣
⁣⁣⁣
…When we can admit that were suffering⁣⁣⁣
⁣⁣⁣
I’ve lost a lot ⁣⁣⁣
I‘ve made a lot of mistakes ⁣⁣⁣
And I’ve been in some really dark places ⁣⁣⁣
⁣⁣⁣
…I’m sure you have too⁣⁣⁣
⁣⁣⁣
Coming from someone who has been through hell & back, I hope I can help others grow and see the value in bettering themselves REGARDLESS of where they came from. There’s no competition. There’s no easier or harder life… we’ve all experienced pain.⁣⁣… Let this be a reminder that you CAN get through it, you’re not alone, & it DOES get better⁣⁣
⁣⁣
Sending you love 🙏🏼❤️